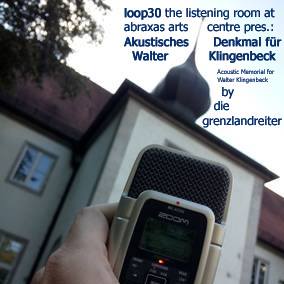 Walter Klingenbeck (19241943) from Munich was one of a group of youngsters who fought Nazi propaganda with graffitis and attempts at airing anti-fascist broadcasts with self-made radio transmitters. In 2006, die grenzlandreiter (Mathias Huber and Gerald Fiebig) composed an earlier version of this piece for a participative performance in public space. Several dozen people with CD and cassette players commemorated anti-fascist activist Walter Klingenbeck, murdered by the Nazis in 1943, by walking through his Munich neighbourhood playing a composition based on the BBC „Victory“ sign that inspired Klingenbeck’s attempts at airing anti-fascist broadcasts. The present version of the piece was broadcast on Radio Art 106 FM, Tel Aviv (in excerpts), and Kunstradio - Radiokunst, Vienna. In the summer and fall of 2018, on the occasion of Klingenbeck's 75th birthday, the work was exhibited as a sound installation at loop30 – the listening room at the abraxas arts center in Augsburg. Close to Munich and situated in a former Nazi barracks building, the sound art gallery seemed a particularly suitable place for honoring an anti-fascist from Munich.

Links to other work by die grenzlandreiter:

Album „The Medium is the Massacre“: https://gebrauchtemusik.bandcamp.com/album/the-medium-is-the-massacre

Uploaded by mystified on November 4, 2018